Carshalton was once known for its trouts, its walnuts, its watercress beds and its lavender fields, which has inspired us to create a dish especially for it.

Back in 1662, historian Thomas Fuller observed that, “in Cash-Haulton especially, there be excellent trouts: so are there plenty of the best wall-nuts in the same place”. Later, Carshalton was known for its watercress beds – Old Watercress Walk still bears the name – and its lavender fields. Although we usually think of lavender as a scent, it's edible, and closely related to rosemary. Based on all that, we've put together a dish called trout Carshalton, baked with walnuts, scented (lightly) with lavender, and served with watercress. If everyone in Carshalton isn't dining on it by the end of the year, it won't be our fault. If you're not keen on the idea of scenting it with lavender, you can leave that out, or use rosemary instead.

To find out more about Carshalton, the background to this recipe and what inspired us to create it, check out our Independently London blog entry on Carshalton here.

one or two small sprigs of lavender (optional)

a bunch of watercress 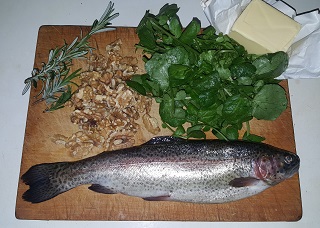 Grease a baking tray with butter (or oil), and melt the rest in a skillet or frying pan. 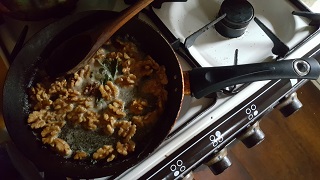 On a low light (so as not to burn the butter), gently sautée the walnuts, and a sprig of lavender if using it. Instead of butter you can use vegetable oil – olive, sunflower, even walnut as it goes – but it won't be as rich. 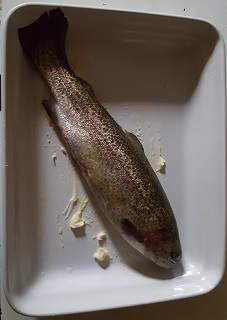 Place the trout into the greased baking tray. Pour the butter and walnuts over it (you'll probably want to take out the lavender). Then cover it, and whack it into the oven for 20–25 minutes (less if using fillets) till cooked through. 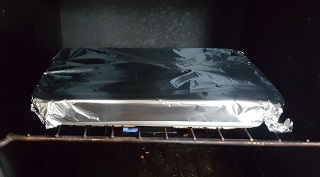 Decorate it with a sprig of lavender, and serve with fresh watercress. 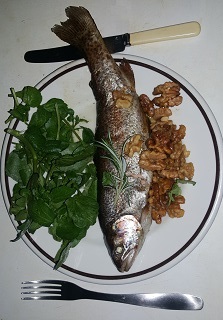